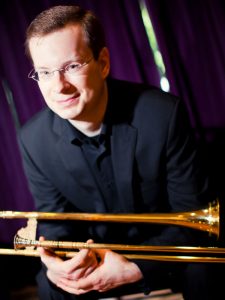 Paul Von Hoff is a trombonist and chamber music specialist who performs extensively on both historic and modern trombones. Paul is a founding member of the Gaudete Brass Quintet, a modern brass quintet founded in 2004 that has toured extensively, given masterclasses at schools such as Juilliard and Eastman, recorded four albums, most recently recording Chicago Moves and sevenfive for Cedille Records, and has premiered over thirty new works. Paul is also a founding member of Rook, a chamber ensemble dedicated to performing the music of the 16th and 17th centuries, where he plays baroque alto, tenor and bass trombones and Renaissance slide trumpet. Rook recently recorded their first album, eleven, featuring the rare instrumental combination of violin, bass violin, harpsichord and trombone. He is the trombone instructor at Carthage College as well on the music faculty at Roosevelt University as artist-in-residence with the GBQ. Paul holds a Bachelors degree cum laude from Northwestern University, a Masters Degree from Roosevelt University and has studied historic trombone with Greg Ingles, as well as modern trombone with Frank Crisafulli, Lawrence Borden, and Jay Friedman.