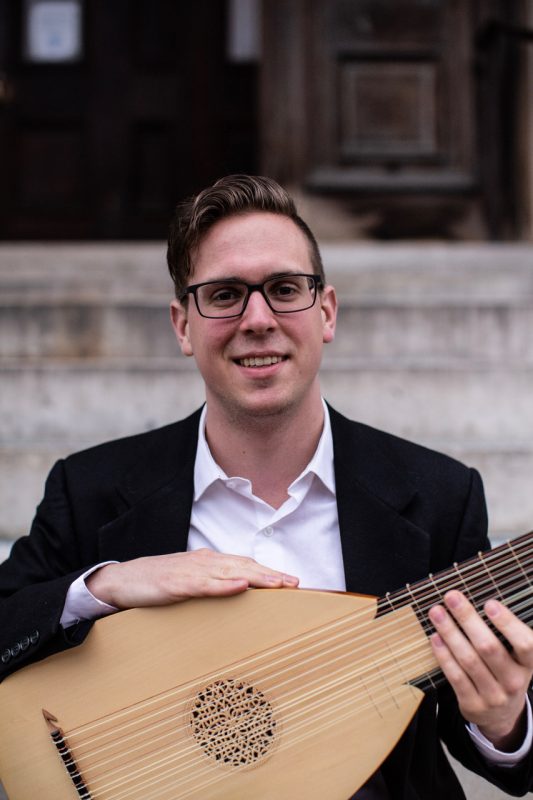 Cameron Welke spends most of his time explaining to well-meaning strangers that the lute is, in fact, quite a different instrument from the flute. He brings a passionate curiosity and a deep creative drive to all manner of historical plucked instruments, which he plays with “expert technical dexterity, consummate phrasing and endearing expressivity” (Chestnut Hill Local). Past and current engagements include performances with the Washington Bach Consort, Tempesta di Mare, the Aston Magna Festival, the Indianapolis Baroque Orchestra, Early Music City, and the Handel Choir of Baltimore. In 2022, he gave the first ever lute masterclasses in the Dominican Republic with Conciertos de la Villa de Santo Domingo. He explores repertoire for two baroque lutes in Duo Silvio with duo partner Richard Stone; the two gave the modern premiere of Stone’s reconstructions of lute duets by Sylvius Leopold Weiss in the fall of 2019.

Cameron began his musical life as a classical violinist and a rock and jazz guitarist. He holds a B.M. in classical guitar performance from Belmont University, where he studied with Francis Perry and John Pell, and a M.M. in historical performance on lute and theorbo from the Peabody Conservatory, where he studied with Richard Stone. He currently teaches lute at Grinnell College and lives in Richmond, Va.