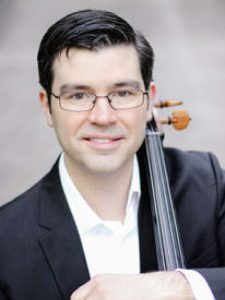 Cellist Benjamin Wyatt enjoys an active career as a performer and teacher.  He is cellist of the Avanti Ensemble and teaches at the Renaissance Music Academy in Blacksburg, VA. He has performed extensively throughout the United States, Europe and Asia, and is a regular guest with various ensembles. His performances have been broadcast live throughout the country. Mr. Wyatt has collaborated with numerous leading artists in recent years, including members of the Guarneri, Vermeer, Pacifica, Vanbrugh, Brentano, Ridge, Meliora, Mendelssohn, Amernet, Chicago and Dover String Quartets, as well as the Eroica and Manhattan Piano Trios, and with pianists Elizabeth Jeanne Schumann, Sivan Silver, Gil Garburg, Peter Laul, and Milana Strezeva. He completed his doctoral studies at the University of Southern California where he was honored as the Outstanding Doctoral Graduate. His undergraduate studies were at the Cleveland Institute of Music and he studied Suzuki pedagogy in New York at the School for Strings. In addition to modern cello, Mr. Wyatt performs as a specialist of early music on Baroque cello.